Last month we got to spend a few days in County Kerry, basing ourselves in one of  The Kenmare Bay Hotel’s self-catering lodges.  Most of our stay was spent outdoors exploring nature reserves, hiking, taking boat trips and playing with water whenever the opportunity arose. Having not been in Kenmare since I was a child, one thing in particular that I wanted to do was stroll round the town and have a peep into the shops.

This I managed to do on the morning The Bavarian took off on a fishing trip. Accompanied by the three boys and having promised them cake or ice cream as a reward for good behaviour, we set off to explore the town. As well as wanting to get a look behing the intriquing shop windows I had seen on our first venture into town on our first day, I also had a recommendation from Karen who blogs at Kenmare Foodie of where best to stop for coffee.

Kenmare is made up of a crossroads, simply put, with one main shopping street (Henry Street). That said we managed to fill three hours no bother. With the exception of one, I left out the clothes shops. Number Three was not in the mood of standing around while I tried on clothes and I had forgotten to bring the buggy. Simplicity boutique looked like it could have a few gems, but with a toddler in tow I was not gong to venture in.

Of all the shops we visited, here are my personal top seven favourites.

Our first shop stop in Kenmare was the Bridge Street Co-op. A combination of the fruit and veg display outside and the beautiful old tiled floor inside made us stop and stare. Popping inside for a look we found a huge range of organic stock from flours to teas to chilled goods to detergents. I treated myself to some Maldon sea salt – so hard to come by in Germany – and a few bars of liquorice, my whole food shop indulgence. 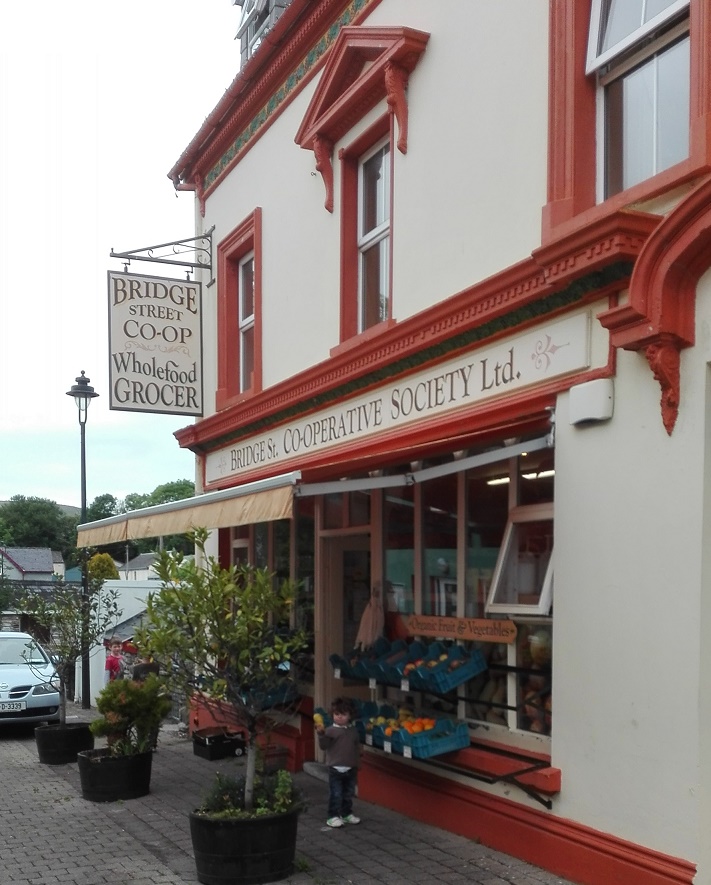 Nest, named after Kenmare (An Neidin – little nest – in Irish), is a dote of a shop made up of three interconnecting rooms. The initial space you walk into displays cards, books and knick-knacks to the left, and women’s clothing to the right. Walk through to the tiny middle room and you find yourself surrounded by a small selection of gorgeous clothing for babies and toddlers. I fell in love with an all-in-one rainproof overall (Hatley if I remember rightly)  but it was just a tiny bit too small for Number Three.  The final of the three rooms is wall-to-wall toys, many of them retro. The boys were in their element looking at the toys. I was happy just to stand a ganze at the beautiful wallpaper one wall of the room. I asked the shop assistant, a lovely, friendly lady, which brand it was and she told me but I have forgotten. Well, that’s one good reason to go back, isn’t it?

If you’re a regular here at Three Sons Later, you’ll know my love for second hand and salvaged goods, flea markets and all things old. I was thrilled, yes, properly excited, to see a selection of junk, for want of a better world, set out on the footpath and the road while we were having our wander around town. Warning the boys not to touch anything, we crossed the street and took a look at this junk shop.  Chairs, vintage toilets, gold-framed mirrors, bit of shelves and dressers, and much, much more lay about. Behind us an archway with metal gates lead into an alley filled with fireplaces, more mirrors, more chairs, more everything.  A man came out to make sure the boys weren’t destroying his inventory – fair enough, they are boys after all and tend to have a knack for inadvertently damaging valuables. Once Number Two started pointing out to him all the items from his inventory we already have at home the man warmed to the boys and took them on a tour of the alley and the little shop beyond. The highlights  for the boys were the wooden fridge with lead lining and the ship’s toilet which needed a boy below deck to open a valve and allow the contents of the loo shoot out into the sea.

Our coffee break was taken at Maison Gourmet, Kenmare’s authentic French coffee shop. We had to que  – that’s how well loved this place is – but it was worth it. Armed with a strawberry tartlet and coffee for me, a mini pizza, a macaron and a proper chocolate eclair for the boys, we found a window seat and watched the world go by. In the background we could hear the staff speak French among themselves then switch to English with their customers, a mixture of tourist and locals. Given that we live just 10km from the border with France, I was afraid I would be disappointed with Maison Gourmet. What if it wasn’t quite as good as actually being in France? I needn’t have been concerned though. It was every bit as good. 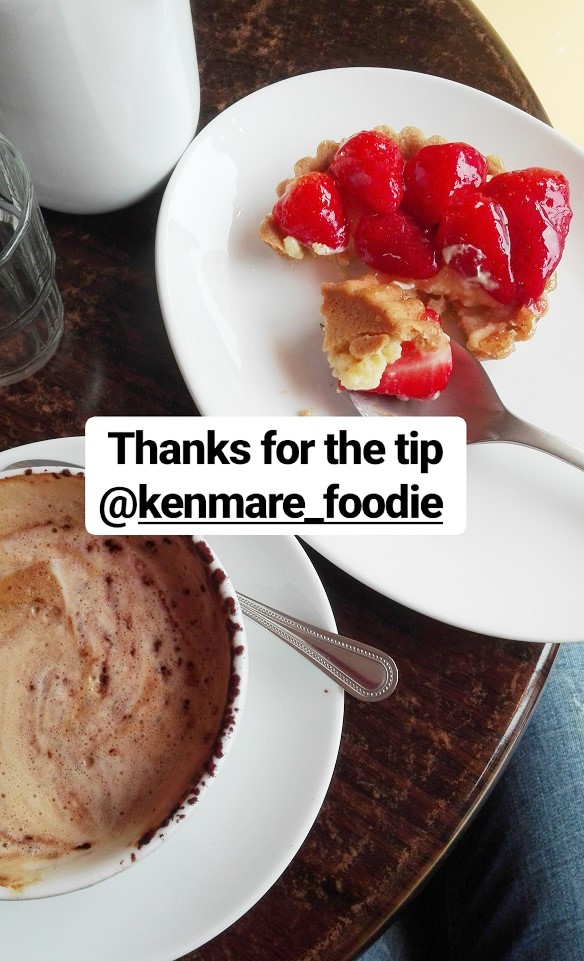 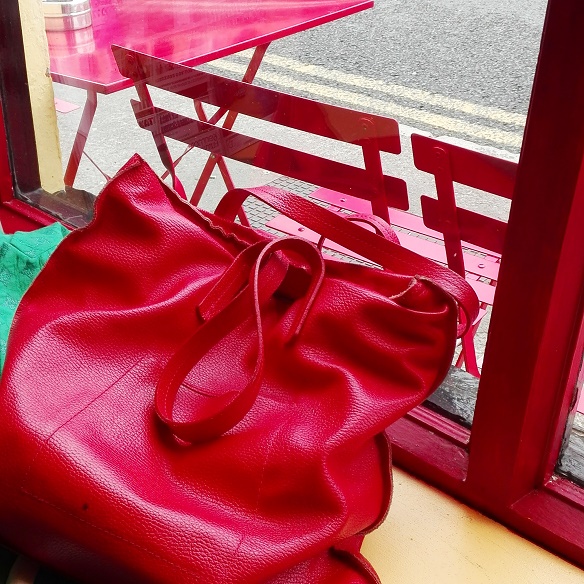 During our four day stay in Kenmare we had two trips to Quinlan’s for fish and chips. Thinking about it now my mouth is watering. The staff are chatty and knowledgeable about fish and what’s being caught at the moment. At the time we were there pollack was coming in but we were too early in the season for mackerel. We tired the hake, the haddock and the whiting. Every bite was delicious. Even our not-so-keen-on-fish children tried it and agreed it was pretty tasty.  Quinlan’s is a Kerry chain. If you come across one in a Kerry town, pop in for a bite. You’ll rarely get better fish and chips.

Before arriving in Kemare I had only seen Joules clothing online. At home I have a Joules flask and some soaps too from a few years ago. When I spotted their Kenmare store I couldn’t wait to get in there and start trying on. The problem was the choosing. I could ahve spend hundreds in there. In the end I came out with two new t-shirts and two of their Paws for Thought dog cartoon mugs. I’m still pining after a pair of wellies, a grey and white stripped dress and several pretty tops. 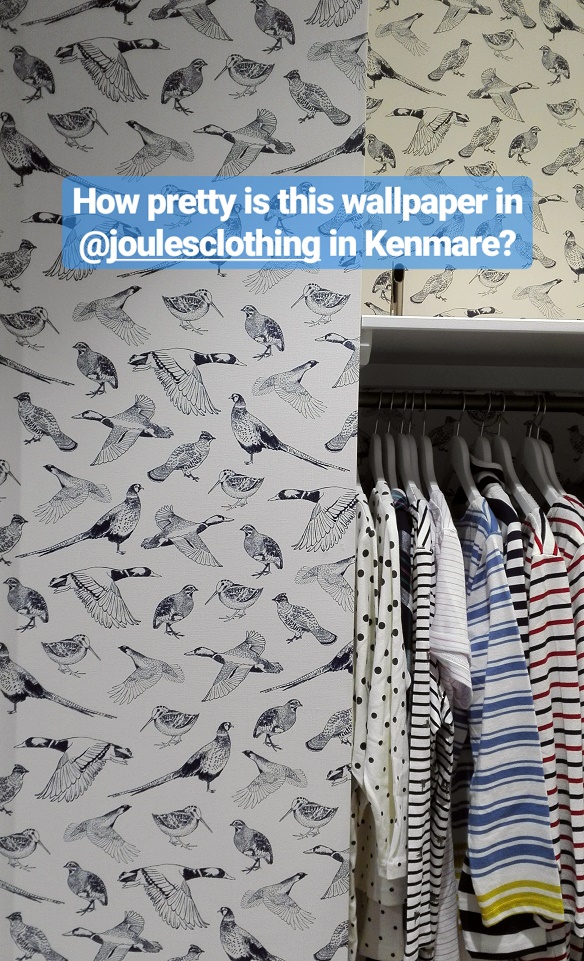 I don’t think it is possible to walk past the Kenmare Ice Cream Parlour without noticing it. For starters there is a huge cow on the street outside it. Depending on the time of day and the weather there may also be a que you need to navigate your way round. I ws dragged in by the kids. Now that they can read, they noticed that here they could get mango flavour whipped ice cream, not something you come across every day. So as not to be left out, I treated myself to a scoop of salted caramel ice cream. The range of flavours was great but made choosing one very difficult. We would have gone in another day but it was closed when we passed.