The wedding is over but normality has not resumed. I mean that in the best possible way.  We are lucky to have been treated to our own little honeymoon in County Kerry, Ireland, as guests of The Kenmare Bay Hotel.  After the busy time we’ve had so far this year – the lice, the hen party, the First Communion , Number Three’s accident, my sister’s wedding – being asked if we’d like a three night break was like someone had finally noticed we were about to crack and decided to save us. Yes! we said, we’d love to! And we meant it.

The Bavarian has seen a lot of Ireland but never been to Kerry. The same goes for the children. I hadn’t been to Kerry since I was a student but we spent several holidays there when I was a child. Glenbeigh, Lough Caragh, Killorglin, Moll’s Gap, Muckross House, Killarney, Torc Waterfall, the German butcher in Fossa – all of these names came flooding back to me as I thought about Kerry again. I know I’d been to Kenmare too but I couldn’t remember it. 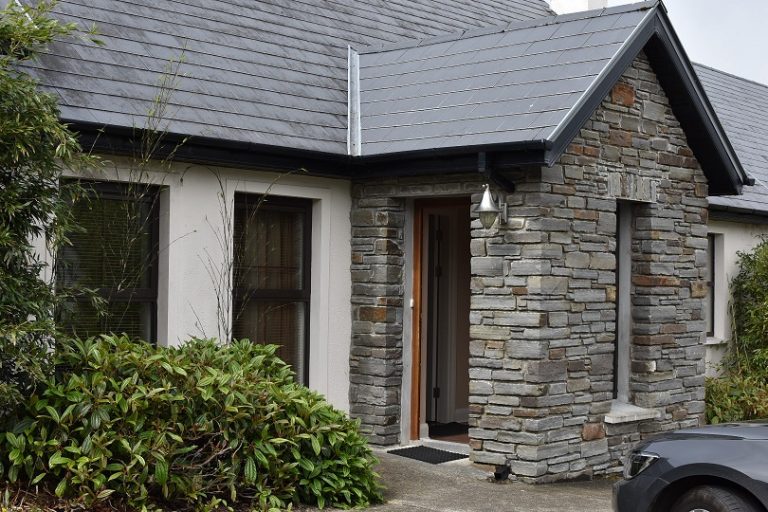 We set off on the Monday after the wedding, arriving at the hotel about four in the afternoon. Along the way we’d stopped off at the Rock of Cashel for our lunch break. Being just over two hours into our four hour drive, it was the ideal choice. But back to Kenmare. I’ll go into Cashel in another post, I hope.

After a day spent mostly in the car, we checked into our self-catering lodge in the hotel grounds and headed off to explore the town. The Kenmare Bay Hotel is just on the outskirts of the town and, according to the hotel website and the signpost in the car park, just a three minute walk into town. We were skeptical until we discovered the walkway from the hotel grounds into the town. In five or six minutes, with a toddler insisting on walking rather than use the buggy, we were on Bridge Street. A pleasant couple of hours were passed wandering round the shops, eyeing up restaurants to go to and trying to keep the kids from begging for ice cream (we gave in). To even things out, The Bavarian and I  had a brief stop to  share a portion of hake and chips from Quinlan’s fish shop. 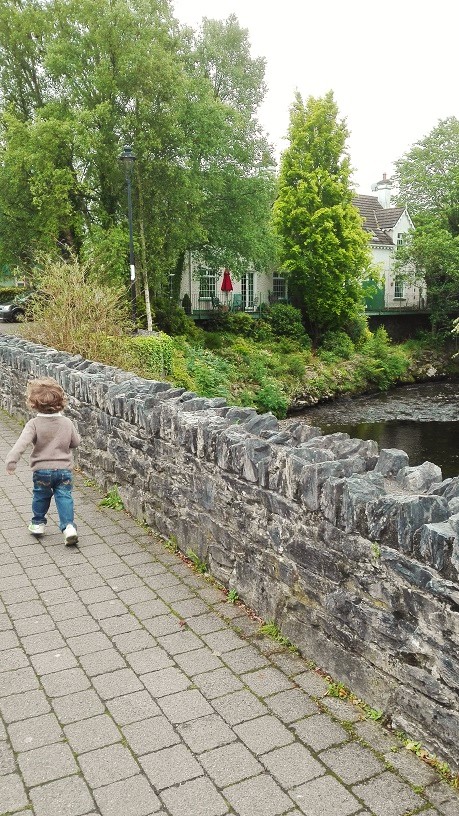 Three days later when it came time to leave, we found it hard. The Kenmare Bay Hotel and the town of Kenmare itself had endeared itself to us for various reasons. We’ve stayed in plenty of hotels and self-catering units over the years with the children, both in Ireland and abroad. This holiday was one of the better ones. On our last morning, as we sat in the hotel dining room and treated ourselves to a buffet breakfast, I was trying to put my finger on what was different this time round. I ran my theory past The Bavarian and he agreed, plus he had some input of his own.

Obviously the children said they loved to pool and the TV in their room. Looking at the bigger picture, what appealed to The Bavarian and me was that basically the lodge – a two bedroom bungalow – was ideally suited to life with children but was stylish and low-maintenance too. For starters there was a fully fenced-in back garden complete with gas barbecue and picnic table. We could leave the glass double doors from the kitchen/dining room open and not have to watch Number Three like a hawk. Alternatively we could (and I actually did) sit in the garden with a cuppa and a book and relax while the children played indoors. With no stairs, lockable windows and sturdy furniture, there wasn’t much damage the children could have done. 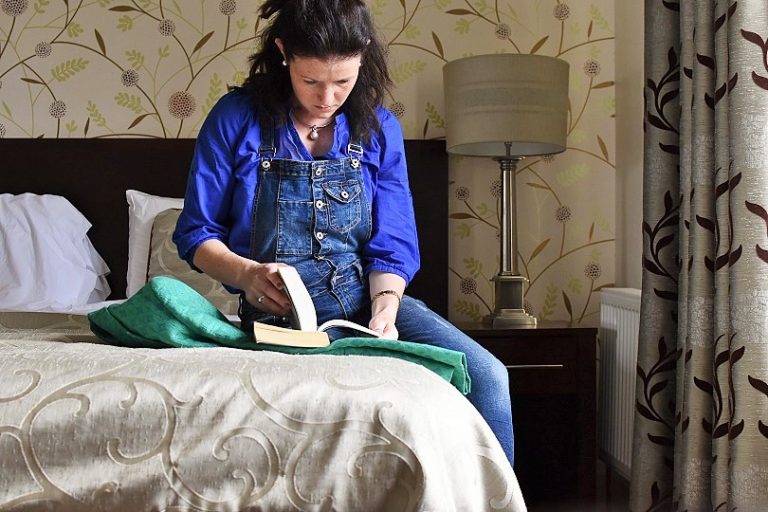 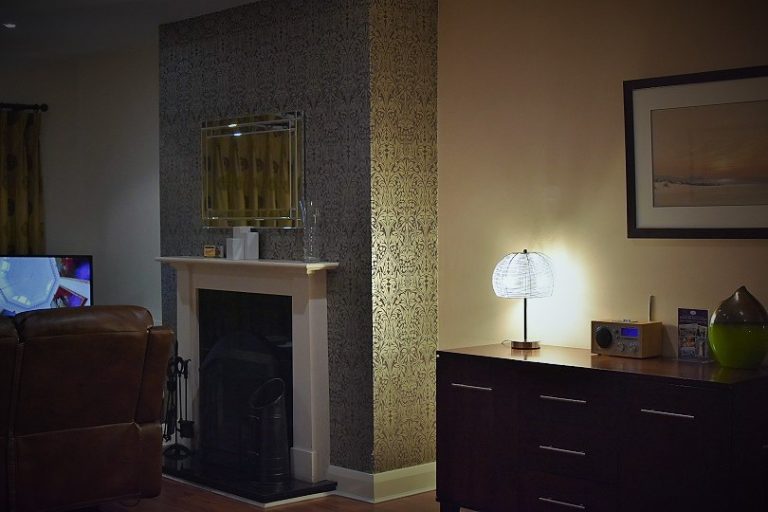 The set up at the hotel is geared to families without everything being aimed solely at children. The decor is modern and elegant but we didn’t constantly have to warn the kids not to run or not to touch things. Booking a babysitter through the hotel is possible and we, for the first time ever on a family holiday, got to go out for a night thanks to the lovely Claire, a local childminder who came works with the hotel as a babysitter for guests. That evening we treated the children to a post-swim dinner from the children’s menu in the bar. They wolfed it down, which we can’t always say about two of our three children’s eating habits in restuarants. Everything was homemade and that worked in our favour. As well as the chicken gougons, the spaghetti bolognese and the lasagne our lot ordered, the menu featured roast chicken with gravy and veg, poached salmon with mash and veg and various small starters.

Something else we appreciated very much was the genuine friendliness of the hotel staff. No matter whether they were dealing with us, the children or other guests, from the pool to reception to the bar the staff were helpful, pleasant and welcoming. Sadly that’s not a given in the hotel industry but In Kenmare it made out stay all the more relaxing.

Why we’d come back

For the reasons above but also because Kenmare and its surrounding area offer so much. On another visit I’d take the boys to Dromquinna Stables out the road and go horse-riding on the beach, combining two of the boys’ biggest loves.

I’d book a babysitter and one of Kemare’s many fabulous restaurants for the same night so I could really make the most of a night off. The mistake we made this time was to book the babysitter and forget about booking a table. We ended up with bar food down the town which was tasty but not what we had in mind. Everywhere we wanted to go was booked out.

If we were returning in the Irish school holidays we would probably use the kids’ club. Initially the boys were disappointed that it wasn’t available during our stay but we ended up finding plenty to occupy us, with day trips to Sneem, Glengarriff and the Killarney lakes. 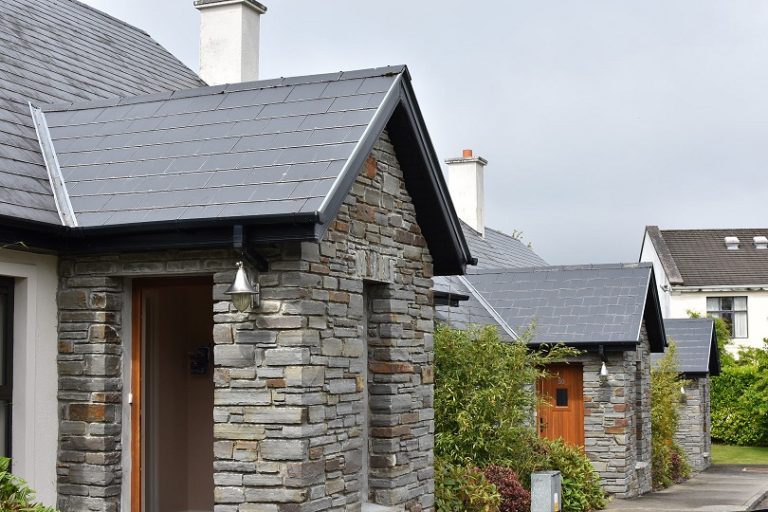 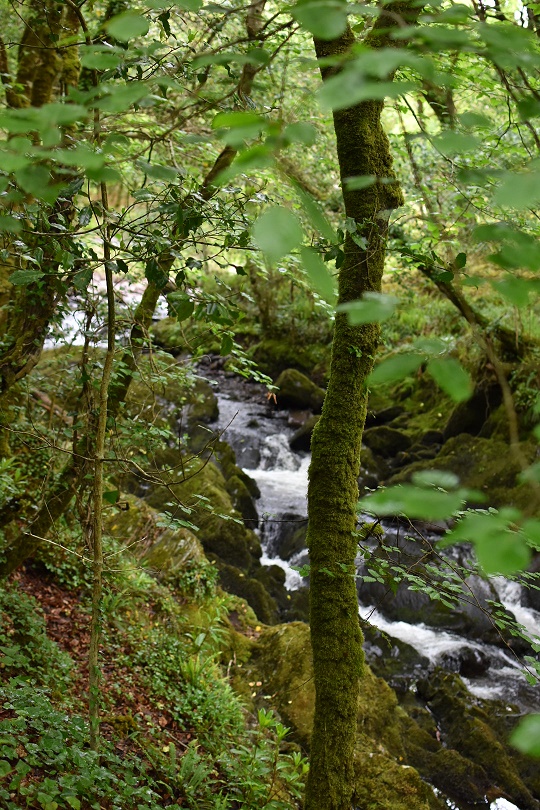 During our stay at Kenmare Bay Hotel’s self-catering accommodation, we cooked, swam, hiked, ate, relaxed and generally had a good time. With pretty much no house work to be done (although I did use the washer-dryer when we were almost running out of clothes), we had lots of time to do as we pleased.

With Kenmare as our base, we took a trip to Glengarriff Nature Reserve and hiked. We took a boat to stunning Garnish Island, spotting seals along the way. We stopped at Moll’s Gap on the way to Sneem and ate pancakes at Strawberry Fields restaurant. We took a lakeside forest walk on the road to Killarney. We enjoyed ourselves.

[Disclaimer: We were asked by The Kenmare Bay Hotel to stay in and review their self-catering lodges and hotel facilities. All words and photos are my own. All meals (including those in the hotel), entrance fees, days trips and babysitting services were paid for by The Bavarian and me.]