Counting the days till school starts? Dreading the lunch making and uniform washing? Living for the return of routine and early nights? Whatever your own personal back-to-school mindset may be, know that I am a few steps ahead of you and here to help.

Over here school started back on the insanely early date of August 6th, so whatever you may be feeling about the impending start of the school year, at least you don’t have to deal with it all while the weather is approaching 40°C and the humidity is soaring.  Now that school has been back on for a full three weeks, I am in a position to look back and see what helped get us off to a semi-smooth start and pass that on. 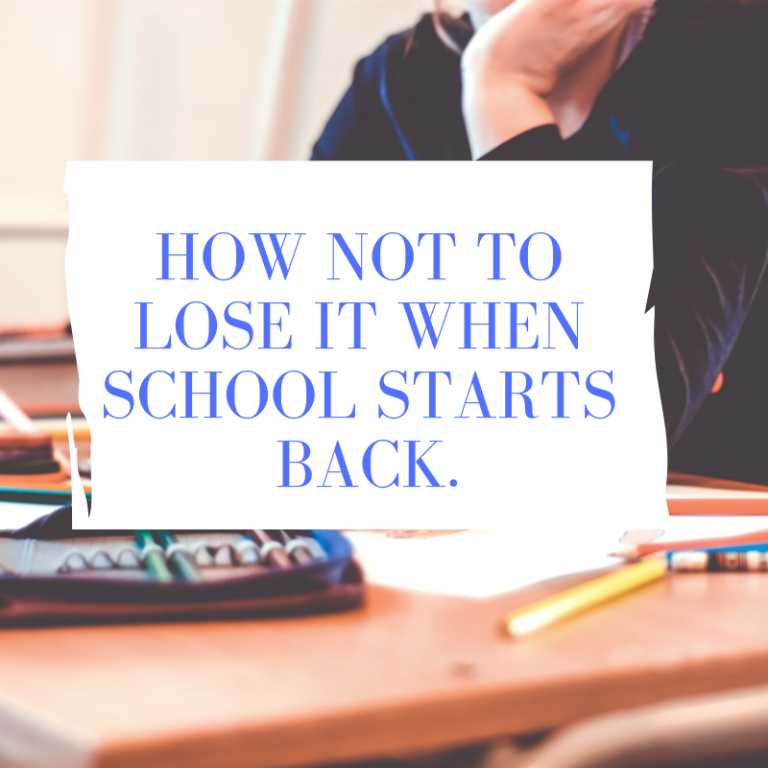 Don’t Let The Dread Spoil The Last Week of Summer

As someone who from childhood onwards felt the Sunday night dread ,I know that for many of us the start of the new school years brings with it a largely unfounded sense of burden.  Last year, heading back to a job I didn’t like on the same day that school was re-starting, I was crippled with dread. I couldn’t think straight for days in the lead up to it, ruining the last week of the holidays for myself as a result. This year, as going back to work after a lovely, relaxing holiday collided with the first day of secondary school for our eldest, I felt that same horrible sense of burden creep up again. It took me two or three days, but I fought it off finally.

On top of using my fallback tips to beat that overwhelmed feeling, I also tried to focus on what the worst thing that could happen would be. It worked. All the worry seemed to melt away when I realised that if one of the children arrived at school without the right books, the world would not end. If I got to work and some catastrophe had happened in my absence, I would just have to deal with it, the same as if it had happened when I was around.  Nothing I could imagine as a realistic event was sufficient to warrant the awful feelings I was dealing with. I shook them off, ignored them, made sure I ate well and that I got enough sleep. Yes, I was still slightly on edge but it was nothing compared to this time last year.

In the musical ‘The King & I’ there is a song with the line “Make believe you’re brave and the trick will take you far”. Well Oscar Hammerstein was a clever guy because, you know what, the trick works. In comes in all sorts of guises. Whether you know it as “put on a happy face”, “dress for the job you want not the job you have” or Harry Hill’s “the  power of suggestion”, the sentiment is the same. Acting like you have got a grip makes people (often including yourself) feel like you do.

Several years ago I wrote about creating the illusion of being well dressed. I still hold to that. Turning up at the school gates looking presentable gives you and everyone around you the impression you have a handle on things. You might still have your PJs on underneath or have doctored up the previous day’s make up, but it is better for you than arriving looking a dog’s dinner, if you ask me.  My pal Sinead from Bumbles of Rice recently wrote a brilliant piece on how to display some semblance of having life under control when you are not actually on top of your game. Read it. You will love it.

At this point I would genuinely like to add that I, and I think I can say the same of Sinead,  do not want to say that a little bit of lip gloss and positive thinking can cure you of anything. It certainly can’t. But for many parents  – myself included – a little bit of attention, distraction and relaxation can make a big difference to the day-to-day business of getting kids up, out and organised.

Speaking of which, keeping your household organised is reasonably easy if you stick to some handy little hack and rules, like these on sports bags, and using appliances with timers, these on working with lists and on clustering tasks, and these ones on laundry sorting and clean floors.

To finish I will leave you with the musings of a favourite blogger of mine who also happens to be a teacher and a mum too (and another Sinead as it happens!). This post from Shinners and the Brood will give you a little reassurance that you are not alone in your feeling of dread or relief at school starting again.

What’s your own best back-to-school hack? I would love to know, so please leave a comment and share your wisdom. We’re all in this together after all.