Twenty and thirty years ago I’d get letters and cards in the post. At home. Then away  – at the Gaeltacht, on Erasmus, on my summer in Canada. Excitedly I’d open them, read and re-read them. Birthday wishes, belated birthday wishes, just-to-say-hi notes, across-the-miles cards, long letters on what I was missing and who was missing me. I  put them away to be re-read years later, to laugh at or cry at.  Literally to have and to hold.

By the time I got to Australia post had been replaced by e-mail, e-cards and texts. Over the years the e-mails and texts have slowly been replaced with whats apps and dm’s. Real cards and letters still come occasionally. I fish out the bills and pay them. Still there’s always a flutter of excitement within me when I see a handwritten address, especially if Christmas and my birthday are far off.  The remainder of the post gets torn in half and binned. Often unopened. 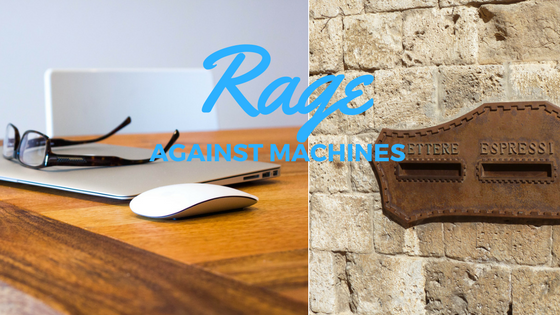 The pre-approval for a car loan because I temporarily had money from my savings account in my current account.

The  awkward and inconvenient “for your convenience” changes to my insurance.

The notification that my credit card had been frozen after 20 years of custom because I was two days late in paying five euro.

The insincere, computer-generated, waste-of-my-good-money birthday cards from another bank.
The letters from charities I have asked not to contact me asking me for a donation I already give monthly.
The annual magazine from my mortgage lender which I’ve asked them to stop sending me.
The this-letter-has-been-generated-by-a-computer-and-is-valid-without-a-signature letters.
Computer-generated annoyance. Computer-generated filling up the bin. Computer-generated killing of trees.
Now even my phone is rising up against me. Long gone the “who could that be?” thoughts when the phone rang. Long gone the phone actually ringing. Replaced now with beeps, pings, gongs and blings. Apps that send me warnings because I haven’t done something in so many days. Reminders. Push notifications. Recommended pages. “If you liked this…”
LEAVE ME ALONE! I want to scream at them all.
DON’T CALL ME, I’LL CALL YOU.
DON’T KEEP IN TOUCH.
I’LL LET YOU KNOW IF I NEED YOU.
Because I’m a person. I like people-generated thoughts and  letters with signatures. I like real sentiment and genuine interest. Even genuine disinterest. I like my friends to think of me on my birthday but if they forget, that’s fine because they are people too.
I know it is a lot to ask, but can we please go back to people to being in charge of machines and not the opposite?