Its done. We’ve finally finished! It took us a while but we have completed our chicken coop and the girls have moved in.

If you’ve read my post on preparing for chicken-keeping, you’ll know that I was on Pinterest looking for housing ideas. I know that prettiness is not the main consideration when planning a chicken coop, but since we were going to build a new structure in the garden, I did want it to blend in. The spot we had chosen as the coop location was already a bit of a dumping ground and the last thing I wanted to do was replace it with an ugly, albeit functional, animal pen.

The Bavarian, wonderful man that he is, listened to all my wishes  – having a window box, using salvaged materials, going for a rustic look, using climbing plants – and built a coop that is better than I imagined we could manage. The only compromise we had to make was with the roof. The inital plan had been to use the stack of lovely terracotta roof tiles that the previous owners of the house left in the shed. The problem was that that would have left the coop very dark inside. In the end, after MUCH deliberation, we chose corrugated plexiglass. 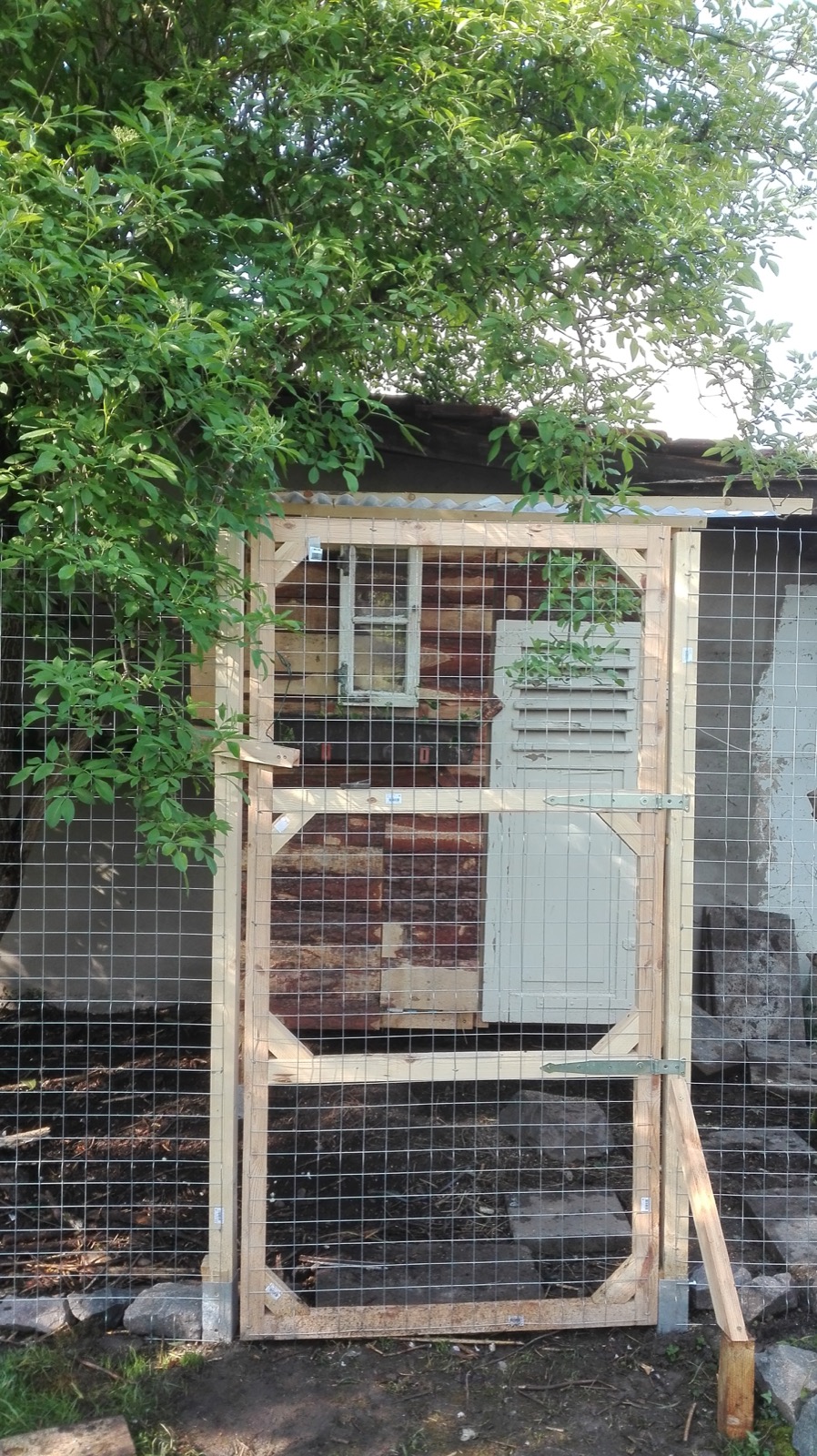 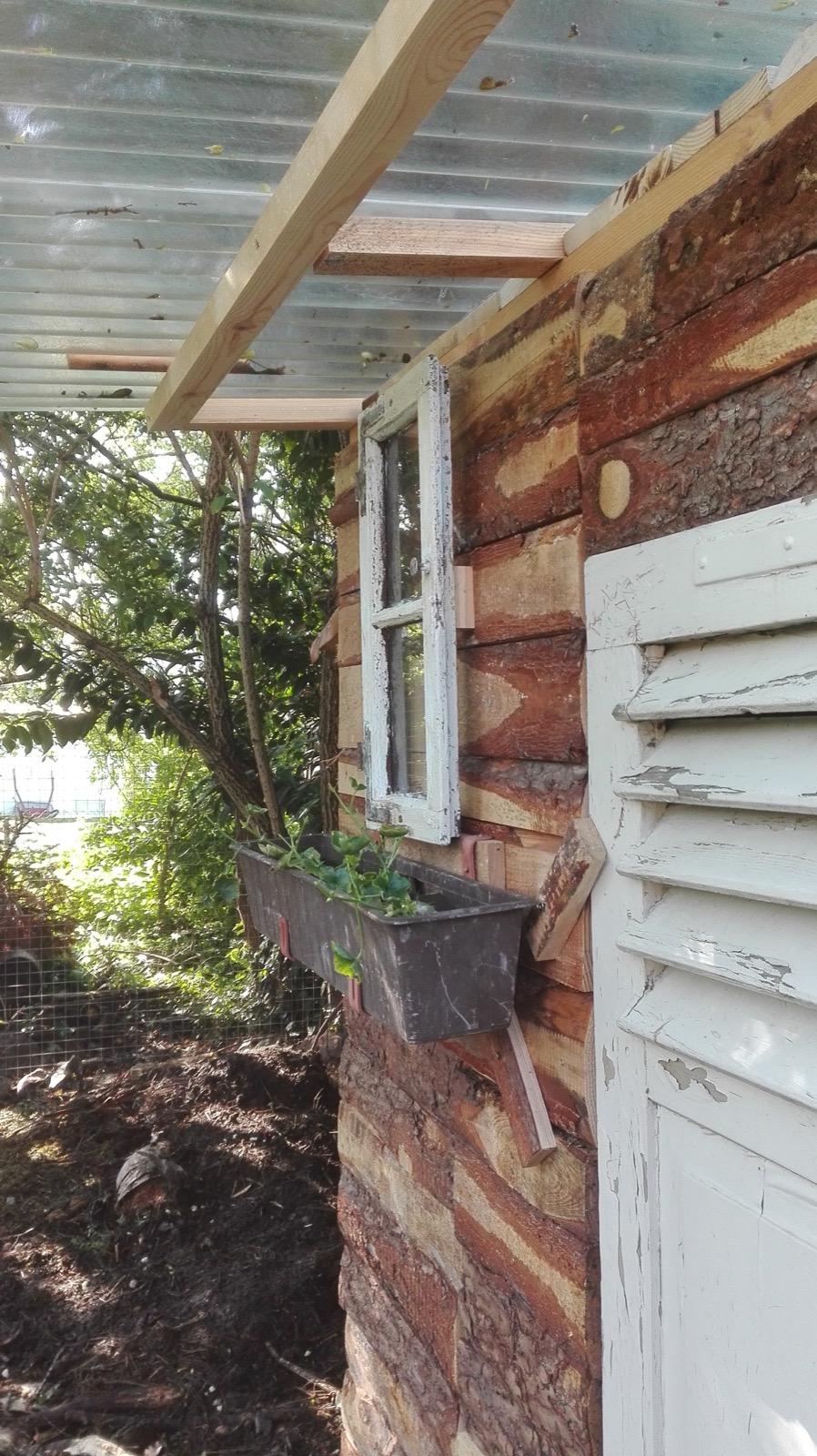 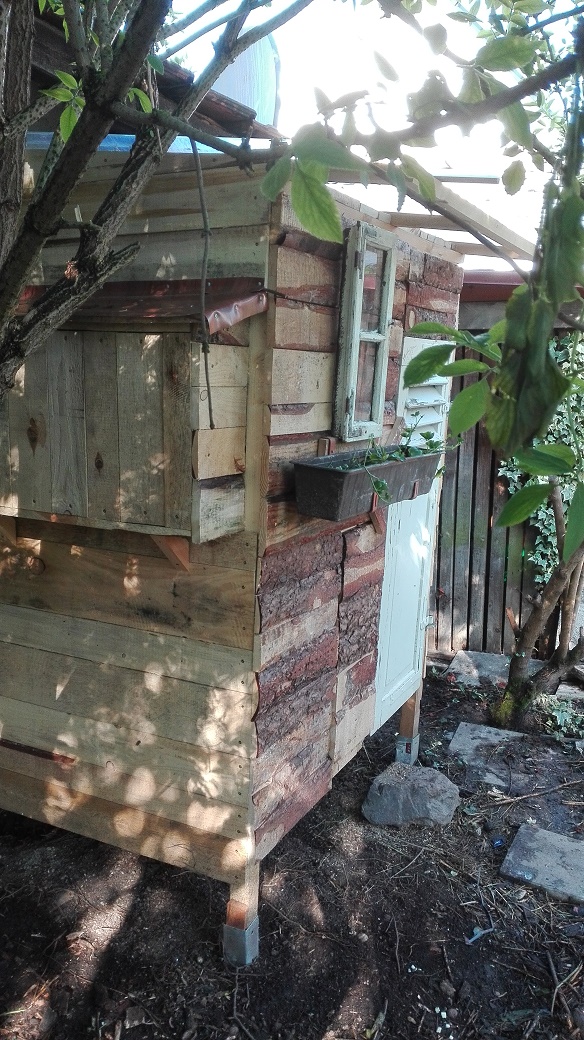 Even though operation chicken coop started out as me saying what I wanted and The Bavarian doing it, it quickly turned into a family project and that was wonderful. The boys are at an age now where they can help out and enjoy it. The five of us were outside in all sorts of weather over the few weeks it took us to prepare the coop. We ate picnic lunches in the garden and spent full days outdoors. The Bavarian and I drank endless cups of tea and coffee in the rain as we considered what to do next whenever a problem arose. The children joined in with carrying planks, fetching screws and loved the trips to the DIY store and the saw mill.

Even now, with the coop and run completed, chicken-keeping is very much a family thing. Number One gets up and dressed as soon as he wakes. Then it is wellies on and off to check on the chickens. He has no problem picking them up, rooting for eggs and keeping them from heading for the gate once it is opened. He is the only one of us, so far, who can tell the hens apart with certainty. Two have a few individual features which makes it a bit easier, but the others are pretty much identical.

Number Two and Three are a little standoffish in comparison. Number Two is result-oriented, going in to look for eggs, but is not too fussed about picking up a bird. Number Three loves to stand at the fence and watch them, saying “maw-ning chik-ins” or “bock bock bock”. 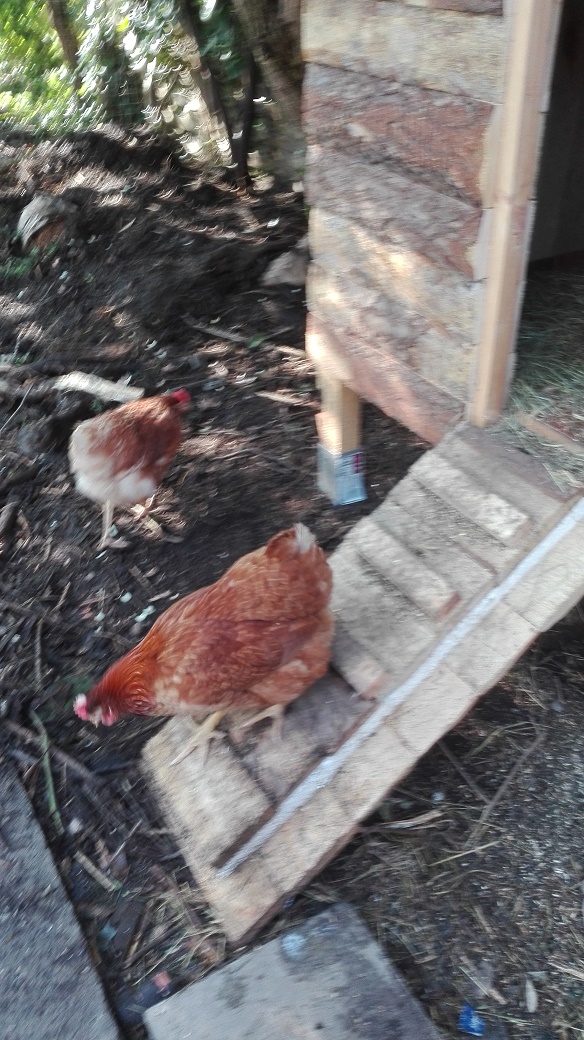 Here’s a rough guide to how The Bavarian built the coop and run.  He started by measuring and making a general plan. It was important to build the coop on stilts to lessen the chance of damp, cold and of rodents.

After hammering the fencing post holders (I only know the technical name for these in German!) into the ground at the correct distance from one another, he inserted the posts and built the frame for the coop. That was pretty quick to do.

On the right hand side of the front of the coop he built a door, on the left separate panels. The bottom right would be the ramp door for the chickens to use. When all that was done, he installed the insulation and covered it in planks from the saw mill, which he cut to size at home. We were lucky to be able to get planks with bark on one side. I love the look they give the coop.

On the left hand wall of the coop The Bavarian left space for a window. This he covered with a wooden flap. Instead of plexiglass for this window he used fine mesh wire so that it can be used for ventilation. Next to the window are the laying boxes, accessible on from inside the coop.

On the right hand wall of the coop, the bottom half can swing open as a wide, low door. This is for raking out the bedding and cleaning the coop out. The floor and back wall are lined with linoleum so that we can hose the coop out now and again easily.

The door and the decorative window are from my stash of salvaged goods. I am over the moon that we were able to integrate them into the coop. Sadly my window box of geraniums was attacked by the hens before we got to mount it. Hopefully it’ll recover!

To the inside of the shutter door and the side door The Bavarian attached the food and water dispensers, which he also built himself. His talents know no end, I can tell you.

The first eggs have been laid. We are having them for tea today. So now, at last, we are happy chicken owners.

24 thoughts on “Building A Chicken Coop – A Family Project”