It’s the weekend! Hands up who is doing their big shop today? The weekly shop, the groceries, the messages, whatever you like to call it. When do you do yours?  Friday used to be my day for it, being my day off work. I say used to because I haven’t done the big shop in weeks.

A while back, flicking through Instagram, I was stopped in my tracks by a phrase I had never seen before, “the bi-annual big shop”.

Bi-annual as in twice a year. 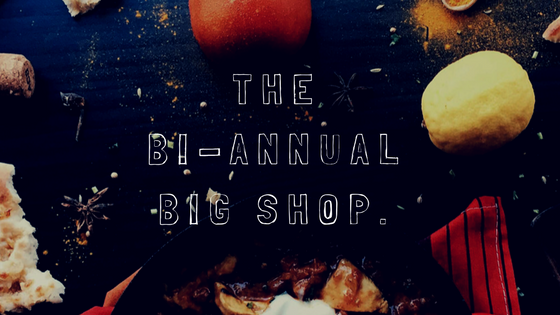 That’s nuts, I thought to myself. Who’d do that?

Over the course of the next few days the phrase was on a loop in my mind. “The bi-annual big shop”. Imagine doing the groceries twice a year instead of fifty-two times. Fifty less big grocery shops in the year. Fifty less lists to write. Fifty less times hauling bulging bags in from the car, never mind the whole putting away business.

Three weeks ago I took the plunge and did it. Trays of tinned tomatoes, coconut milk and various beans went into the trolley followed by a couple of dozen jars and bottles – oil, sundried tomatoes, black cherries. Packs of coffee and boxes of pasta were stacked like a wall of bricks on top. Washing up liquid, dishwasher tabs, laundry detergent, loo roll, kitchen roll, rolls of bin bags, packs of dish cloths, bathroom wipes and cartons of juice finished off the load.

Struggling to get the trolley to move, I headed for the till attracting strange glances. The lady who ended up behind me in the queue for the till shot me evils a few times. She didn’t seem to notice before taking her place behind me how cleverly I had crammed several months’ worth of groceries into one trolley. Perhaps she thought I had some version of OCD whereby I had to buy 12 of everything. The same thing happend the person who queued behind me when I came back in and loaded up a second trolley.

Back home The Bavarian stopped and stared when I opened the boot. “12 litres of oil?” he asked raising an eyebrow. It appears he thought I was joking about the big big shop.  I stood in the hall and directed as the children and the Bavarian hauled in box upon box of food. “The cellar”, “The kitchen”, “The bathroom”, “The cellar”, “The laundry room”. An hour later we had our own mini supermarket in the cellar, well-stocked presses in the kitchen and bathroom shelves heaving with toothpaste and shower gel. I stood back, pleased with myself.

Three weeks in to the new regime, things are going well. Trips to the shop are unbelievably quick since all we have to get is bread, milk, fruit and veg on an as-needed basis. Menu planning is easy because we’ve stocked up on so much. Waste has been reduced because we haven’t as much fresh food in the house. Batch cooking has become a thing for us now – I rarely used to do it. The Bavarian even got in on the fun and whipped up double batches of bolognese and of chili con carne before bed the other night. Four dinners just like that because of one five-minute visit to the butcher.

So far, I’m a convert. I’ve even batch-bought wine. I mean we’re using the cellar now, so we should do it properly, right?