Here’s a question for you. What springs to mind when you hear “Luxembourg”? You’re drawing a blank aren’t you? Maybe you thought of the Jardin du Luxembourg – in Paris – or perhaps you remembered it has something to do with tax and banking. What didn’t happen is that your eyes misted over and you daydreamed about how much you’ve always longed to visit Luxembourg. Am I right? I’m right.

I honestly can’t remember how it happened but we decided to go camping in Luxembourg a couple of weeks ago. We booked the campsite about a week before leaving. As the trip neared, whenever I mentioned to anyone that we were going to Luxembourg I could almost see the unasked question hanging in the air. “Why?”. No-one actually asked it, which is good because I didn’t have an answer.

Now that we’ve been, I have an answer. From beginning to end our trip to Luxembourg provided one surprise after another. If you want to know what to expect in Luxembourg, here’s my reply. The unexpected.

Within our first 24 hours in Luxembourg there were several exclamations of surprise. It began with the border crossing at Dasburg. This little town winds downhill to the river Our and is nothing like the Germany we know. Crossing the river we entered Luxembourg and began a winding uphill drive through a forest. After a while the woods gave way to rolling hills of crops, cattle and ponies. Relatively remote countryside surrounded us. Having been to Luxembourg city once, crossing from France at Schengen and following the motorway all the way, it didn’t occur to me that I was potentially missing out on stunning scenery. Wasn’t Luxemburg almost all city? Surprise people, it is not!

During our four days, we spent very little time in towns. Our campsite is located in a small village and we spent most of our time there. On the couple of trips we did take, we saw beautiful rural landscapes. Wheat fields under blue skies, panoramas of green fields and dark forests, lakes for fishing  – the Bavarian caught us a trout in one – and streams for paddling in.

The towns we stopped in – Clervaux and Vianden – have a huge amount of flair. We were lucky to have plenty of sun, although the temperatures were low for summer, which made the street side cafes, window boxes, hanging baskets and old stone buildings seem all the more attractive. 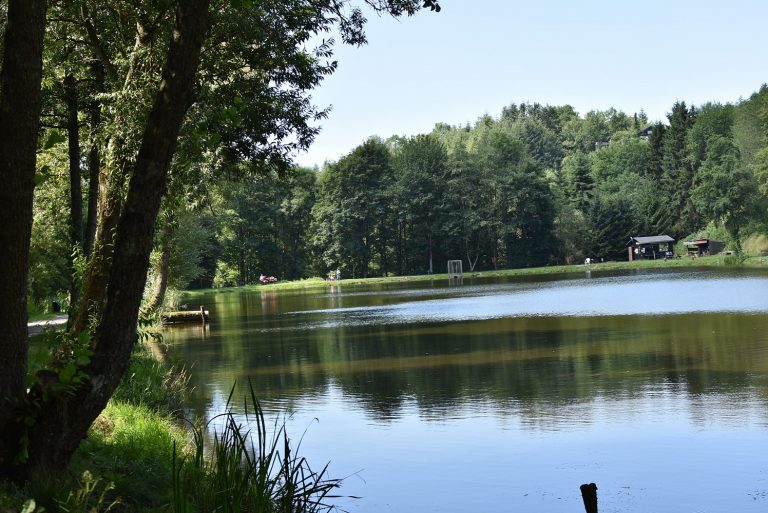 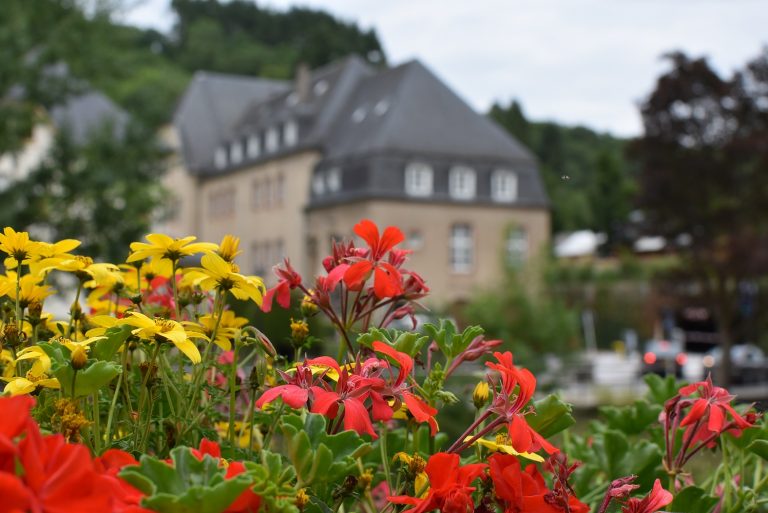 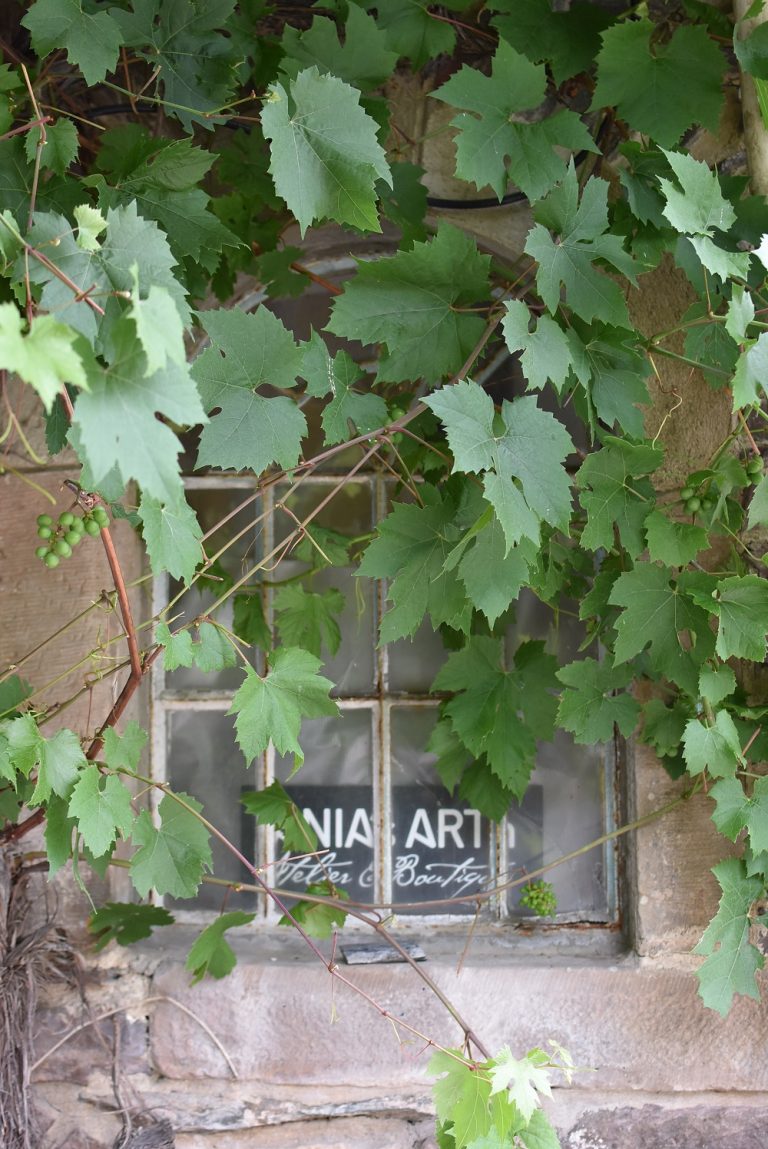 Everywhere has a history, of course. Some places have layer upon layer of events associated with them, others less so. Luxembourg, so small and surrounded as it is by larger, more powerful countries, has seen a lot of change in size and shape. Over the past 350 years Luxembourg has more than halved its size.   I found it slightly strange to see huge castles on hills, like the one we visited in Vianden, in such a tiny country. But back in the 11th century when a castle was first built on this site, Luxembourg wasn’t the place it is now. By the 14th century the castle had taken on the shape it has now, more or less. Over the centuries, with the France-Spanish War, the French Revolutionary Wars and the Belgian Revolution affecting Luxembourg, fortresses were needed.

In more recent history, of course, there were the first and second World Wars. In August of 1914 Luxembourg came under German occupation and in the mid 1940s Luxembourg was the scene of part of the Battle of the Bulge in the Ardennes. There is a wealth of history to discover in this small nation. [For a fantastic account of WW2 in Belgium and Luxembourg, a visit to Bastogne War Museum is a must. Here’s what we thought of it.] 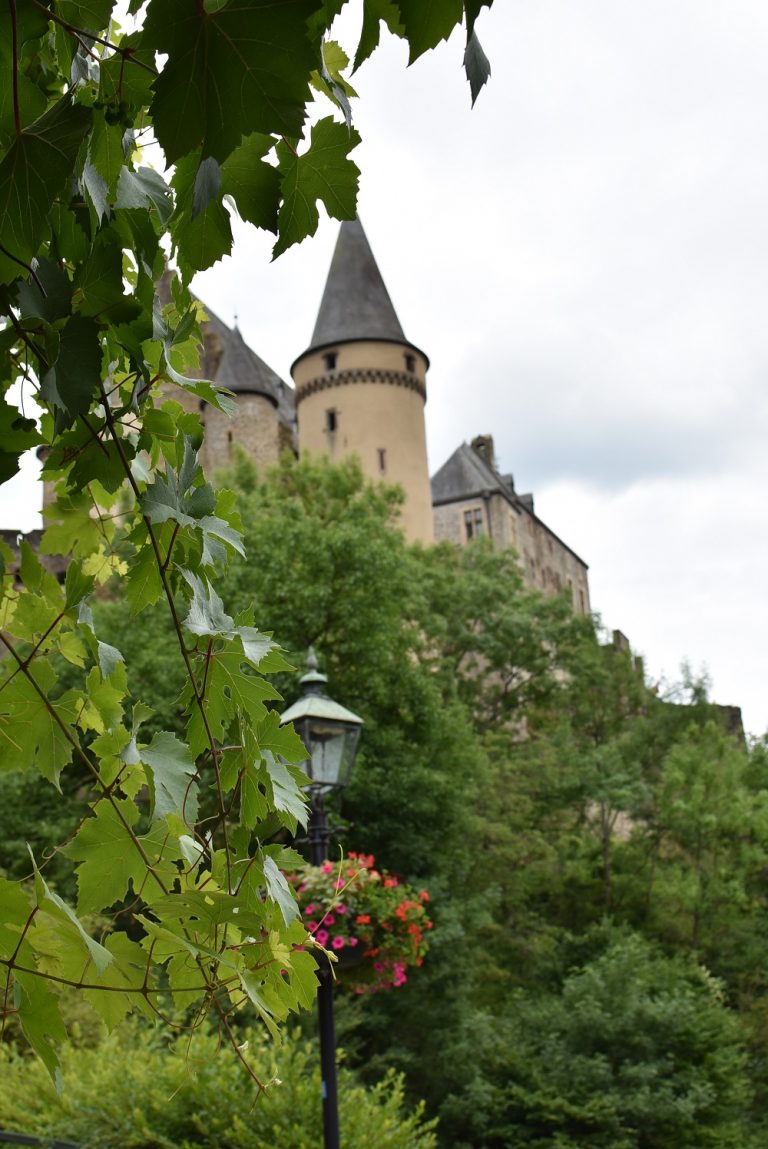 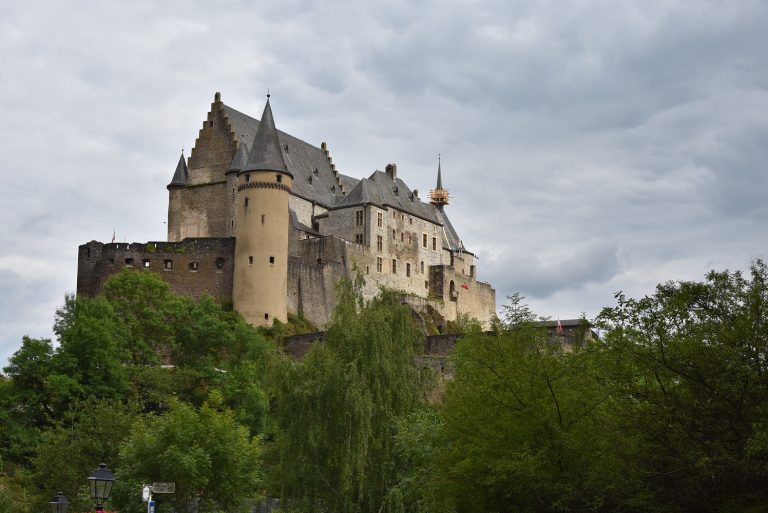 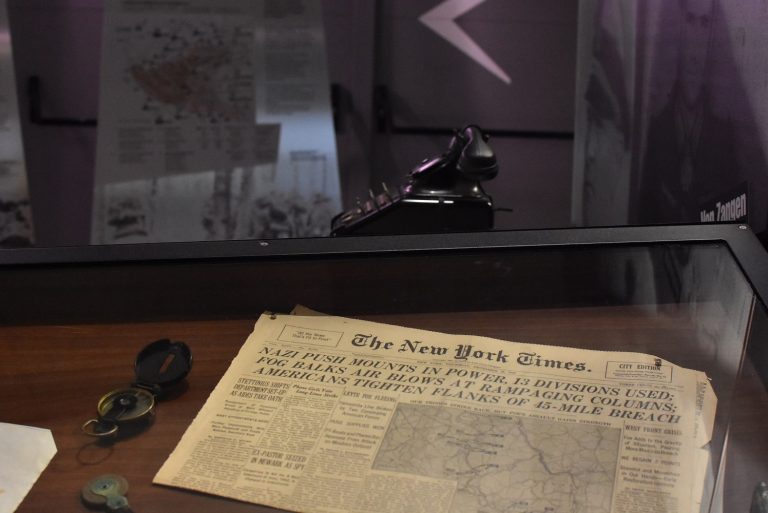 Throughout France, Spain and Italy there are  huge campsites packed with British, Dutch and Irish families. Visiting Luxembourg, Belgium or Germany doesn’t seem to cross many people’s minds. There are tons of hidden gems of campsites dotted around Luxembourg, set in greenery along rivers and streams or at lakes. The rates are good, the facilities are clean and the spaces provided for tents and caravans are generous. The campsite we stayed at – Camping Val d’Or in Enscherange – was ideal for us. With two playgrounds, a bar, clean shower and wash-up facilities and no cars on the site it was perfect for a relaxed break. The photos below show the view from the tent. Although it is a small campsite there were chalets, mobile homes and wooden huts to rent for those not bringing a tent or caravan. For three nights with our tent, two adults, three children (one under six, hence free) and a dog we paid €117 altogether. 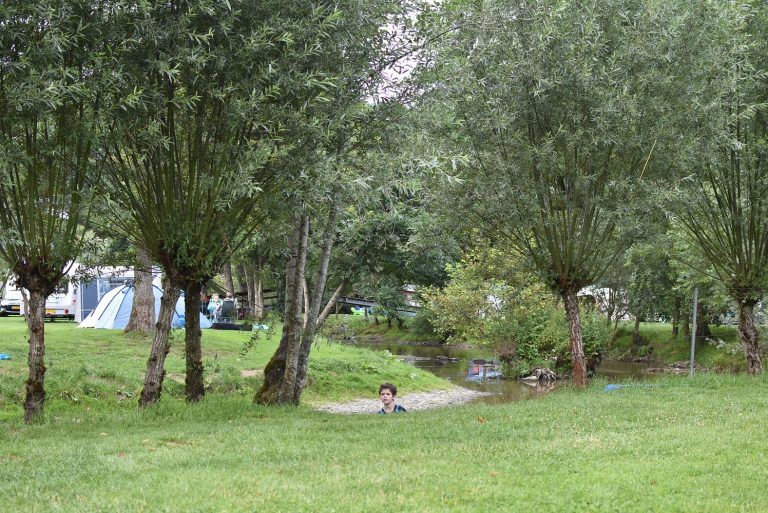 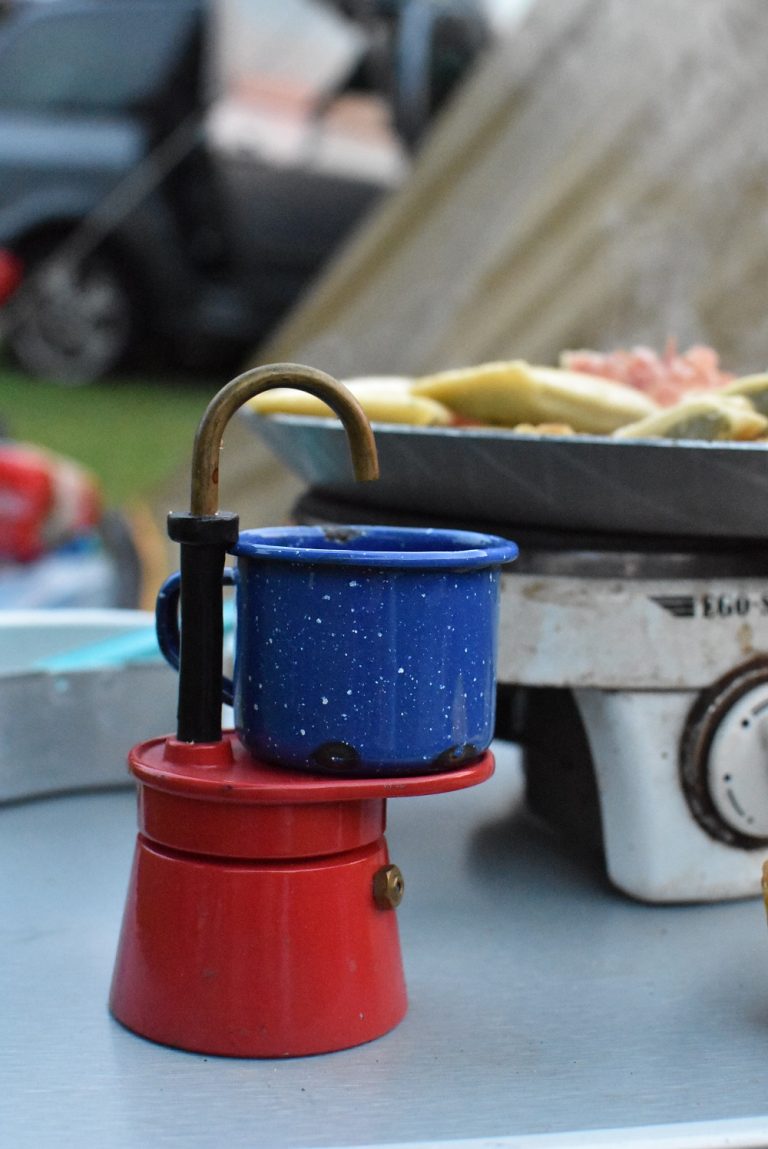 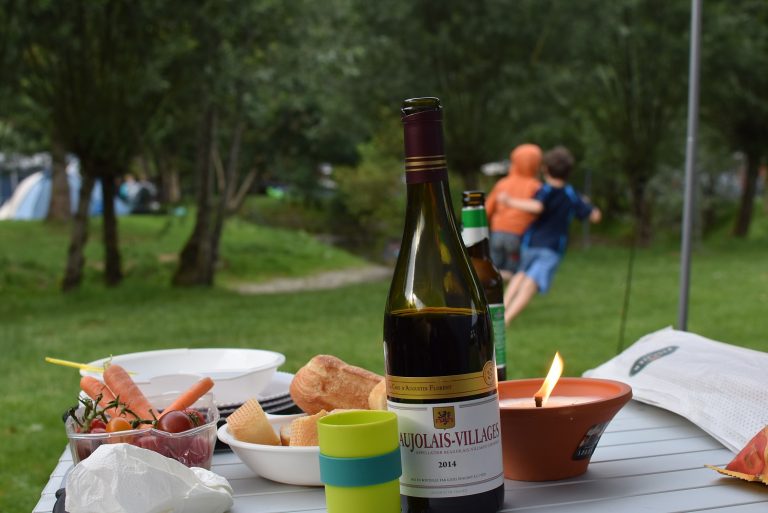 Apart from travel in Asia and Greece, I’ve never been much bothered about which language to speak on holiday. Being fluent in English and German helps and I have enough French, Spanish, Dutch and Italian to order a coffee or ask if someone speaks English. Luxembourg, however, made me feel linguistically inept.

To be honest I have no idea what the national language or languages of Luxembourg are.  Checking in to the campsite was no problem – the owner speaks Dutch, English and German – but on every other occasion that I had to speak to someone, no matter which language I used it was the wrong one. If I spoke English, they replied in German. If I spoke German, they replied in Dutch/Flemish/ Luxembourgish. If I spoke Dutch, they replied in French. Even when we asked a waitress who we’d heard speak English if she coul d direct us to the nearest petrol station, she looked at us blankly and asked what we meant. After a few minutes of naming all the foreign words we know for petrol station, she asked “Do you need a gas station?”.  Let’s just say, interaction was a challenge.

Would we go back?

Definitely. The whole family was impressed with Luxembourg and I think it is pretty safe to say that this wasn’t our last trip there. With fishing, museums, canoeing, visiting the city itself, the scenery and the quality of the campsites, Luxembourg certainly has plenty to offer us. A lot more that expected, that’s for sure.